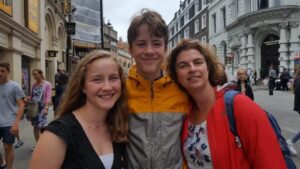 Melanie Stowell has been teaching Latin in APS for 11 years. Over those years, she has taught at Yorktown, Washington-Liberty, H-B Woodlawn, and Gunston, but she has mostly been at Swanson, where she feels truly part of the community, living close to the school and having had all three of her children attend Swanson in recent years. Anyone who has spoken to Dr. Stowell will know that she is British; despite nearly 30 years in the States, her accent isn’t going anywhere! She came to the States to do her PhD in Classics at Cornell and later moved from NY State to VA when her husband got a job here in Arlington.

Dr. Stowell loves languages and would happily just keep learning new ones all her life. She loves the musical side of how different languages sound, as well as the more “mathematical” side of their grammatical structures. Languages also open us up to different worlds, where we can get a glimpse into how other people perceive and experience the world, including (as with Latin) people who lived thousands of years ago. She started with French and German in middle school and found her passion for classical languages at Cambridge University. She also lived and taught English in Prague, just after the fall of Communism, and learned Czech while she was there. She recently started teaching herself Spanish, mostly from a set of language-learning CDs which she listens to in her car. Since her driving time has dropped to almost nothing with COVID-19, progress is slow.

She also loves teaching. She grew up watching her mother tutor students with learning difficulties and saw how much her mother cared about each child’s well-being, making sure they knew how much she believed in them, always setting the bar high and not letting her students sell themselves short. Dr. Stowell strives to do the same for her students, and feels fortunate to be teaching a subject where she often has the same group for two or three years in a row, giving her an opportunity to get to know her students really well and to see them mature and grow in their learning.

Dr. Stowell thinks about her students and how best to teach and reach them a lot (honestly perhaps too much, her children would suggest), and appreciates talking over specific challenges and joys with her APS colleagues. She has found supportive and creative thinking about teaching from so many wonderful teachers in all the Arlington schools she has worked at. Her advice to new teachers would be to reach out to colleagues for professional and moral support; teaching is a very rewarding profession, but it can be emotionally draining, especially when there is a student that you cannot reach, no matter how hard you try. But you do keep trying and you let that student know that you are there and ready for them, when they are ready for you.

When asked about her proudest moment in APS, Dr. Stowell was hard pressed to name one. Any time she hears back from a past student is a moment of great pride and delight, but this past summer, she received a truly special gift: an email from a young man she had taught in 7th, 8th and 9th grade, who wrote to tell her of his graduation from the University of Georgia with a degree in Biological Engineering. The email, full of wonderful news of his research project, his new job, and his plans and interests, included these words: “the lessons of language and of life that you instill in your students has not left my thought for a day since leaving your class…I just wanted to express from the bottom of my heart how much I appreciate the impact you have had on my education.” An email like that is exactly why Dr. Stowell feels like this is one of the best jobs you can have, and she honestly couldn’t come up with a job she’d be doing if she weren’t teaching. She would teach– and has– other subjects (piano and yoga among them), because she loves to share anything she is passionate about, but it looks like teaching is her vocation (from the Latin: vocāre, “to call,” she points out…there, see, she just can’t help herself).