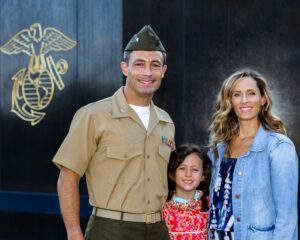 A former International Flight Attendant & Language Translator for US Airways, Madame Rauseo currently teaches French and serves as the World Languages Department Chair.  She is co-sponsor of The Swanson Club de Français.

When asked what makes the Foreign Language Department important for students, Ms. Rauseo shared a quote from The Economist, “[French] culture delights in elegance, quality and form: the exquisite hand-stitching on the haute-couture* dress; the immaculately glazed tartes aux framboises* lined up in the pâtisserie* window. The art de vivre* remains a source of both grand gestures and small stolen pleasures.”  Ms. Rauseo believes, “languages open a window to other belief systems around the world, helping to eliminate the idea that only one way is normal. Additionally, languages promote empathy and a more open-minded approach to daily life.  French education encourages students to seek joie de vivre* or “small stolen pleasures” in their everyday routines.”

Ms. Rauseo’s most influential mentors are her students.  “A fidgety student tapping a pencil against a desk lets me know that I need to incorporate more movement into the lesson.  The high achiever who completes a self-paced activity 10 minutes early indicates that I should add an extension. In addition to my students, my little girl inspires me every day.  When it comes to learning, she reminds me about the power of storytelling and play.”

Ms. Rauseo has both joys and challenges in her job.  “The greatest joy of my job is watching students make personal connections to the curriculum.   It’s hearing a student sing the lyrics to a French song. Or, watching a student passionately describe a Paris monument to the class en Français*! My greatest challenge is fostering those connections in every student, especially in large group classes…after lunch.”  😉

What would Ms. Rauseo do if she were not teaching?  “I would be a backup dancer for Janet Jackson, a role I’ve been prepping for in my mind, since 1986.  Otherwise I’d be an author and illustrator of children’s books in English and French. I’d write stories based on travels with my husband and daughter, and everything would have a fictional French twist, bien sûr*!”

Ms. Rauseo feels that the staff makes APS special.  “APS encourages creative freedom among teachers, and my colleagues are incredible sources of support. Ms. Hailey has always welcomed my classes into the library when we needed extra space for crêpe making and floor scrabble. Mr. Ray always ensured that we had the supplies we needed.  Every year, the PE department has shared equipment with me for Pétanque (French Bocce Ball). Mr. Perrot and I swap exams to ensure fair grading. At our daily lunches, my world language colleagues openly share resources and new technology. Ms. Zekan helps with everything in between.  And when the going gets really rough, Mr. Norris makes a mean cup of English tea.  These moments come to mind, but there are many other special people that I interact with daily that make my work meaningful, not to mention my students.  In this new virtual environment, my colleagues continue to inspire me! I have learned so much from them in the last few months. To echo Janet Jackson, “[teachers] of the world unite. Strength in numbers, we can get it right.”