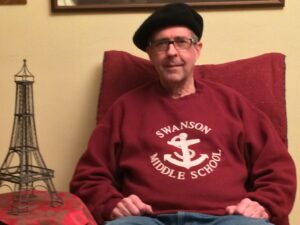 Prior to joining APS, Mr. Perrot taught Latin in Loudoun County Public Schools. When a position to teach both French and Latin opened at Swanson five years ago, he jumped at the opportunity. This was a homecoming of sorts, first because he lived a number of years in France and has an equal passion for both languages, and then quite literally because he lives very close by!  Mr. Perrot is currently teaching French 1 and a section on French culture in the Admiral’s Wheel 6th grade exploratory course which he calls ‘Geography with a French twist’. This is Mr. Perrot’s twentieth year in teaching.

Mr. Perrot chose a teaching career because he loves learning and sharing what he knows with others.  He values subject mastery and working with students to help them reach their highest level of competence during the time he teaches them. He strives to create a safe place for students to make and learn from their mistakes and enjoys helping them develop the self-confidence we all need to approach and tackle new and sometimes difficult subjects. “Pointing kids in a direction to excel in the subjects I teach does not mean that they will pursue these subjects forever,” he says, “but just being part of a student’s enthusiasm for learning is the most gratifying part of teaching.”

Mr. Perrot speaks with appreciation for the education he received from his own parents. As a museum director, his father was an educator who impressed upon all four of his children (and every other kid he met!) the importance of learning. His father was instrumental in helping him develop his own enthusiasm for life-long learning and continues to support his interests to this day. From his middle school education Mr. Perrot is still in touch with his 7th grade history teacher Allan Hansee who has always modeled his enthusiasm for learning in all aspects of his life and who was the greatest single influence on Mr. Perrot during his formative school years.

When asked what he likes about Swanson, Mr. Perrot said, “Swanson is such a vibrant place. I especially like the collegiality and growing diversity of our staff. The students are first-rate and wonderfully inquisitive, with an earnestness that I find special about the middle school age in general. My daily witness to the intellectual energy and curiosity of our students is an inspiration.” One of his greatest joys is keeping in touch with students who continue to excel in the subjects he teaches, and especially running into former students who are now professional colleagues teaching in Virginia schools.

Mr. Perrot continues to pursue his interests reading and speaking Latin. He is a board member of The North American Institute of Living Latin Studies (SALVI) and participates regularly in conferences and workshops to speak and study Latin. He reads widely in texts written across the 2,500 year span of Latin literature, most recently a delightful love poem by the 1st century Roman poet Tibullus. He also enjoys reading in French, especially works by the nineteenth century writer Guy de Maupassant, and hopes to return to France at the first opportunity once COVID-19 is no longer a threat.